Here It Is! Prizes on Arizona’s Route 66.

Holbrook, Arizona. The first town we’d come to where Route 66 is truly alive and well. Holbrook is home to the Wigwam Motel, one of the last two surviving “Wigwam Village style” motels in the U.S. -the penultimate in a chain of seven built from 1933 to 1950. This little Arizona town also boasts several mural-tributes to Route 66, painted on the walls of its downtown businesses. Here as well you will find Joe & Aggie’s Cafe -a Route 66 favorite since 1943.

We’d supped at Joe & Aggie’s Monday evening when we came into town. The funky, absolutely endearing, ‘Route 66’ festooned menu offers Mexican and American food, and I’d opted for the American cafe classic -burger and fries. (There’s only so much blue corn tortilla I feel that I should consume in any given 24 hour period…) For breakfast Tuesday morning, I was ready to try their famous “warm sopapillas with honey”, and Oh My Lord, were they tasty? Yes, yes they were. Yum. 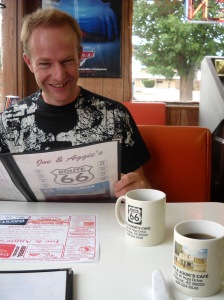 Happy husband… he likes to start the morning off with breakfast very first thing, whilst I can put breakfast off until noon…. 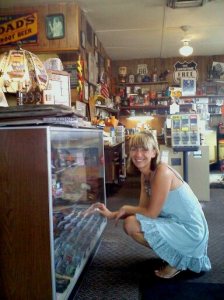 Checking out the Pixar “Cars’ Collection

Our waiter was an absolute charmer. He told us hilarious stories about people he meets working on Route 66, stars that come in that he doesn’t always recognize, the enormous popularity of Route 66 with European travel groups (who knew?), and the connection with the Cafe and the crew of the Pixar movie Cars. If you weren’t already aware of it, Cars is based on Route 66 and the locations in the movie are conglomerates / composites of Route 66 icon images. An excellent article on that subject is available at http://rwarn17588.wordpress.com/2006/06/09/a-route-66-guide-to-the-cars-movie/.

As it turns out, the Pixar / Disney crew spent a lot of time at Joe and Aggie’s Cafe while researching for the movie, and the Cafe owners were the recipients of a large donation of Cars merchandise after the movie release. The collection is proudly displayed right here in the Cafe! (My personal favorites are Mater, Fred, and Fillmore 🙂  ) 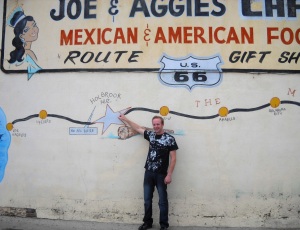 After breakfast, we took the advice of the Cafe owner and strolled over to the Navajo County Courthouse, built in 1898 and now a museum of Holbrook’s wild and colorful past. Apparently, Arizona has recently began a tourist encouragement program called ‘The Passport’. You can pick up your own Arizona passport at several locations throughout Arizona and then you collect stamps at designated Route 66 Arizona destinations. If you get all 10 stamps, there is a PRIZE! Oh, I was so all over that. A trip to the courthouse / museum to acquire my passport was a must. While there, I got my Holbrook stamp. Whoo-hoo! One down, baby!

The museum still houses a one-piece, steel jail that was purchased in 1898 from a defunct ship and installed in the dungeon-like basement of the courthouse. This jail was in use until 1976. Prisoners’ drawings adorn the steel cell walls and bunks, most of them with a decidely 1960’s flavor. 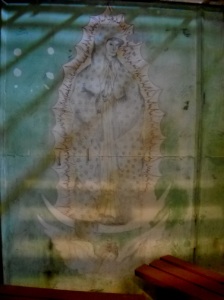 Before leaving Holbrook, we had to tour tiny downtown, with its wacky Route 66 air of kitsch. 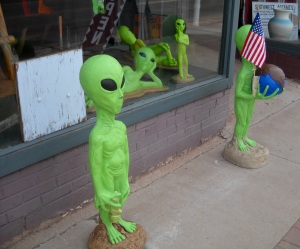 Aliens in Holbrook. Photo by author. 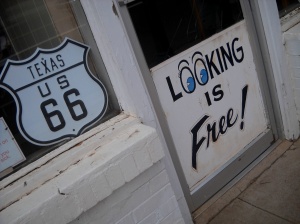 Well, sure, the looking was free…but acquiring our fourth souvenir inside cost us about 17 bucks…

A Route 66 Vanity Plate for our tahoe? Worth it!

With our tahoe feeling spiffy, we again set out West, driving through Geronimo and Joseph City and stopping when we saw the ever classic sign…

These yellow and black signs used to line literally hundreds of miles of Route 66. Much like “Wall Drug”, once you’d finally get to it, you were frick’n wild to know what the hell it is. In this case it is the Jackrabbit Trading Post. Where we purchased souvenir numero cinco -the current issue of “Route 66 Magazine“. Featuring an article on Tinkertown Museum. Which we’d missed out on. Sigh.

I could have gotten one of my “wild card” stamps here on my Arizona passport (with the bonus “wild card” stamp, there is a chance to accumulate 11 stamps -extra prizes!!) but I’d already forgotten the passport was in my purse. Classic. Luckily, there were two more chances ahead of me for the “wild card” stamp.

Next stop? Winslow, Arizona. We had to see Winslow, of course. For one thing, Winslow was one of my required passport stamp locations, for another -The Eagles, baby!

Winslow achieved national fame in 1972 when the Eagles released the song “Take it Easy” which has the line “standing on a corner in Winslow, Arizona.” An entire corner of the town is dedicated to the Eagles, and to this song, ~featuring a statue “standing on the corner”, a mural of a “girl in a flat bed Ford”, an eagle perched in a building window, and the constant silhouette of a couple making out in the window. 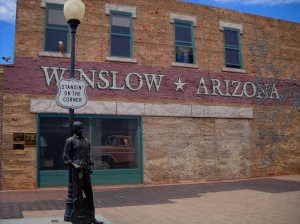 Taking it Easy. Photo by author.

We toured Winslow a bit, listening to the soft strains of “Take It Easy” wafting out of a giftshop. This is a great little town, but alas, we couldn’t linger long. For ahead of us on the Route awaited the stone, crumbling  ruins that are all that remain of the American Meteorite Museum. 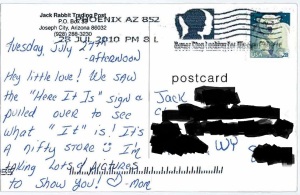