The Great Owl of Bohemia (By-the-Sea)

A thing worth mentioning about sleeping at the side of a highway -you’re going to want to get up bright and early so as to avoid the interested regard of passersby as you make your morning toiletry. We succeeded in this fairly well, waking around 6:30am, parked in our wide spot in the road on old Pacific Highway 1 on this, the 7th day of our roadtrip.

The fog was thick around us as we clambored into the seats of the tahoe. Though we could hear the ocean, we could not yet see it this morning, or much of anything else as we proceeded north up the California coast. Just the winding road ahead, seemingly looping into and out of the soft, white blanket of heavy mists. It was silent and enveloping, and the breeze through the window smelled of wet, growing fronds and fecund soils. I enjoyed the shifting patterns of clouds on the ground, and the scents of the temperate rainforest, …and avoided speaking for the sake of my husband. Though we had the beauty of the sea, and the mystery of the fog, we did not yet have coffee, and to be honest, I’m somewhat cranky without it.

Gradually, the road ahead brightened as the fogs gave way to a weak morning sun, and wonder of wonders -a cafe popped into view around the next bend.

Whale Watchers Cafe was just opening and we were able to acquire a couple of nice, large cups of coffee. We sat companionably on the stone steps outside the cafe, next to a ridiculously adorable puppy who’d been tethered there to wait for his person. While the puppy chewed contentedly on the protruding edge of my flip-flop, my husband waited sagely for the first few swallows from the nectar-tree of the Gods to fill my belly before propositioning that actually sitting down to breakfast this morning would be a fine idea. Though I don’t myself actually eat breakfast, feeling that it gets in the way of my morning coffee consumption, when I have said coffee in hand, I tend to think that just about anything is a fine idea, and so agreed to this plan. It sounded like a good plan; my part of the plan was to have some more coffee while he ate.

The cafe was a little on the pricey side, and it’s not quite as good as it thinks it is, but it was definitely picturesque. They had an outgoing mail slot, and we were finally able to mail some postcards that we’d been carrying with us home to the kiddos. 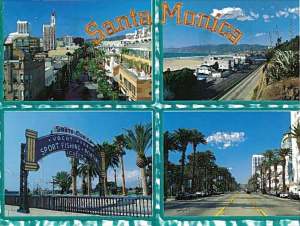 North of the Cafe on Hwy 1, we came to Julia Pfeiffer Burns State Park, the first slice of Big Sur, CA, boasting redwood groves, McWay Falls (an 80-foot waterfall that drops into the ocean), granite cliffs, and panoramic views. In order to hike to the falls, though, you must pay the $10.00 day fee to park, which we declined to do, so we contented ourselves with a view of the park area from the highway.

We continued north on Highway 1 for another 30 miles, until we were approaching Carmel, and a juncture where the old highway curves inland to meet Highway 101 for a stretch. Before we left the rugged Pacific coastline behind for a bit, it was obviously time for another highly scientific sand sample. Collecting sand samples is a serious business, and not to be undertaken lightly by the casual enthusiast.

This sample is labeled Carmel-by-the-Sea, Central California Coast and consists of pure gravel, grey rocks, and dry kelp. No seashells graced this beach, no sand, either. See? Scientific. It looks like sand in the picture, doesn’t it? But it’s not. It’s gravel. And I have a clearly labeled baggie sample to prove it. Truly, this was very interesting to me -in just 160 miles, we had gone from the pure, very fine, soft sand of Pismo Beach, to this completely graveled beachfront.

I enjoyed Carmel simply because the town has added By-the-Sea to its nom de plume. I love it when towns do that. One day, when I live on the coast, I plan to add that postfix to everything I own. Why stop by my house, when instead you could stop by my House-By-the-Sea? Furthermore, it is my opinion that absolutely everything sounds better when you add By-the-Sea to the end. Preferrably, the items in question actually are by the sea, for the sake of accuracy, but regardless -sounds better.

After leaving the aptly named Carmel-By-the-Sea, we headed inland toward San Jose, CA, and our next stop ~The Winchester Mystery House. 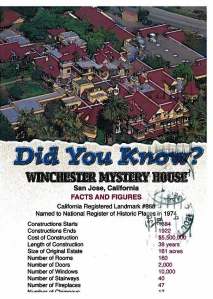 Though I’d visited Winchester House before, my husband had not, and the house that spirits built is a definite must-see. For nearly thirty-eight years, the eccentric Sarah Winchester, heir to the Winchester Rifle fortune, kept her home under constant construction. Literally. With virtually unlimited financial resources, Mrs. Wichester kept her home in a state of continuous flux; 38 years, 7 days a week, 24 hours a day, the construction never ceased- not at night, nor on weekends or holidays. There was never a master plan, though Mrs. Winchester frequently emerged from her Seance Room with continuing architectural designs.

The result was a seven-story Victorian (now only four stories due to the earthquake of 1906) that covers 4 1/2 acres.There are roughly 160 rooms, including 40 bedrooms, two ballrooms, 13 bathrooms, six kitchens, and two basements. The house boasts 47 fireplaces, 47 stairways,  10,000 windows, 2000 doors, 17 chimneys (with evidence of two others), and three elevators.

Fun oddities include staircases that lead only to ceilings, doors that open to walls, secret passages throughout, a door that opens into nowhere three stories up, and the many occurrences of the number 13 throughout the house. For instance, there are 13 bathrooms, with 13 windows in the 13th Bathroom. There are also 13 wall panels in the room prior to the 13th Bathroom, and 13 steps leading to that bathroom. The Carriage Entrance Hall floor is divided into 13 cement sections. There are 13 hooks in the Séance Room, 13 rails by the floor-level skylight in the South Conservatory, 13 steps on many of the stairways, 13 squares on each side of the Otis electric elevator, 13 glass cupolas on the Greenhouse, 13 holes in the sink drain covers, 13 ceiling panels in some of the rooms, and 13 gas jets on the Ballroom chandelier. The chandelier actually came with only 12 gas jets, so Mrs. Winchester had a 13th added. 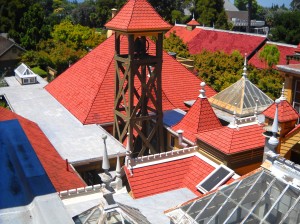 One of the many Tiffany windows 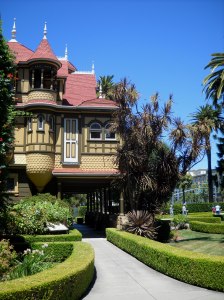 A small portion of The Winchester Mystery House. Photo by author.

Leaving the mystery of the Winchester House, we headed north toward San Fransisco, and into an equally perplexing mystery. That mystery can be summed up as a question, and that quesion is: Where in the hell do people between San Jose and San Fransisco learn how to drive? An online course? Taught in a foreign language? By a dyslexic monkey? It was by far the worst traffic we’d ever encountered, due solely to the fact that not one driver on that stretch of highway had any inkling as to how to operate a motor vehicle in relation to other motor vehicles operating on the same road.

We spent one full hour waiting to cross the Golden Gate Bridge. 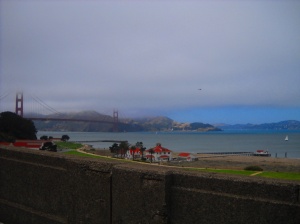 The Golden Gate Bridge. As seen from our car. In traffic.

By the time we exited San Fransisco, it was after 5pm on a Friday evening, and the traffic was heavy toward the coast, resulting in a stop and go pattern that we soon grew tired of, necessitating a dinner stop at the first convenient exit -Petaluma, CA. Petaluma is a cute little town, built on a river, with a historic downtown section that is very nice. We ate pizza in an Old Chicago that had taken advantage of the top half of a century old Victorian storefront.

We made another 150 miles that evening on Highway 101/Redwood Highway before deciding to stop for the night. It was dark, and we were only about 40 miles south of the Avenue of the Giants, to go any farther would be to miss seeing the most spectacular of the redwoods. We found a wide pullout off the highway in a fairly meadowy, foresty section of road, and parked. We had, by then, already checked out a Redwood Forest Park campground or two, but they were all full. Summer weekend = full campgrounds.

In previous road trip blog entries, I have always been able to describe the sensation of falling asleep wherever it was that we happened to be on that given evening. I can’t do that this time, because I absolutely do not remember. And it is not because a longer amount of time has passed since the earlier blog entries; I had notes from the very beginning on where we spent each night, to help organize my entries, and from very early on, the night of Day 7 was a blank. Strangely, when I consulted my husband’s memories, he too was foggy on the erstwhile overnight of this particular day on the road. Only after checking receipts and discovering the Old Chicago dinner slip were we able to recall, very vaguely, the fenced meadow in the redwoods, to the side of a large pullout on the road. Memory ends there, however. No recollection of any of that evening’s toiletry activity, for instance, and if there’s one thing we all realize by now, it is that I remember exactly how and where I went to the bathroom on every overnight stop we made. Obviously, there is only one explanation for this inexplicable memory loss in an otherwise unblemished recollection of our trip.

Or, conceivably, The Great Owl of Bohemia. Google offers that up as a possibility to those who have experienced inexplicable memory loss in the Ancient Redwood Forests of California. Apparently, we saw something we weren’t supposed to, and now just look! An entire night of roadtrip, gone.

Politicians, owls, and secret ritual sacrifices? California should really do something about that.

More photos from this section of the road-trip are available at the following link: